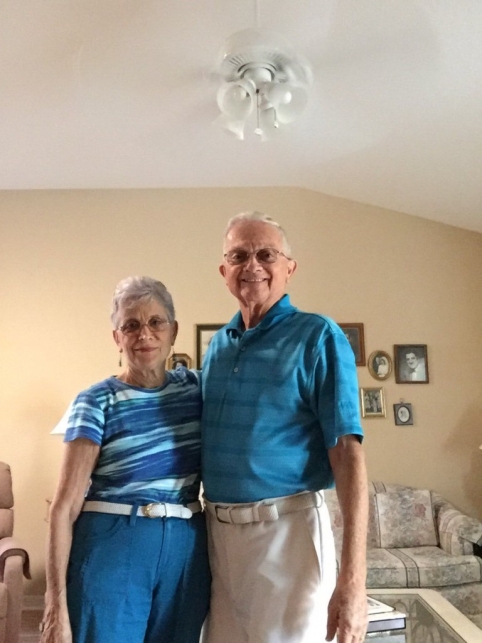 Lisa Cuoco’s husband planned a vacation to Mexico not knowing it would change both of their lives completely and fulfill the dreams that they thought they would never achieve.

Josh and Lisa Cuoco are a Colorado couple who have been married for over 45 years.

Ever since she was a child Lisa had a dream of seeing the ocean. She wants to be able to feel the sand between her toes while walking on the beach.

After working for over 20 years as a secretary, cooped up in an office. Josh and Lisa had saved enough to take a well-deserved vacation and have enough to be able to retire.

So, they decided to take their long-planned vacation to Playa del Carmen, Mexico.

When they arrived in Playa del Carmen they were in for a big surprise. They found a modern, multicultural city with a charm that only the people of Mexico can give you.

“I had a stereotype of what Mexico was like because of what we see in the movies. You imagine this city where everyone moves around on bicycles or in very old cars. But I arrive and I see cars of the year everywhere, buildings and restaurants that looked very elegant. I knew I was in a place that was still growing and was destined to be one of the main tourist attractions in Latin America” says Josh.

You May Also Like this: Myths and Facts About Living In Mexico

More with less (how they managed to live in Mexico)

“I knew that Mexico was cheaper than the main tourist places in the United States like Miami and Los Angeles, but I never imagined that much, here I wasn’t Lisa the secretary working from 9 to 6, I was Lisa the tourist that everyone wanted to spoil”.

Playa del Carmen offers you impressive gastronomic diversity and at an affordable price. Eating at a Mexican restaurant overlooking the sea costs 18 USD per person.

“We went to Catch a restaurant on the Rooftop of the Thompson Hotel, we had already eaten inside the Thompson Hotel in Denver, Colorado and we were going with the idea of spending about 40 USD per person as in the United States, but we got a big surprise, the final bill for the 2 of us was 50 USD and we ate and drank like kings!”

They found themselves fascinated with the cultural and gastronomic diversity. Josh and Lisa just needed a little push to do what they both already were thinking, move to Mexico.

They started researching and managed to find a house just a few blocks from the beach for 200,000 USD. “With that kind of money I could have managed to pay for a little house that’s the best view would be of the highway”.

What they won’t tell you

Not everything was rosy for Josh and Lisa, from the moment they decided to buy a house. They encountered many people looking to take advantage by offering higher prices than they should be.

“At first, we were so excited to get a house that we went to the first person who offered us a property, it turned out to be a complete disaster, this guy was asking us 45% more than the value of the property in the real estate market, not to mention that it was a house that had already been lived in and had quite a few details to fix”.

But the Cuoco’s know very well that good people still exist, no matter where you are in the world.

They decided to keep looking and found a real estate agency whose core values included ethics.

“Many times, we go with the broker that offers us the cheapest price and solves everything faster, but my advice is to ask if they have ethical standards because it is not fair to cheapen someone’s property just to close the sale, I have always said it, a good business is where both parties win”.

After securing their ideal home, this adventurous couple had to face another challenge, the weather. Although they were used to having weeks with temperatures of 30 degrees Celsius. It didn’t compare to the tropical climate of the Riviera Maya.

“The humidity you feel in the Mexican Caribbean is very high!” Lisa comments.

The big difference in the hot days between Playa del Carmen and Colorado is that here I can go to the beach to cool off and it’s only 10 minutes away from my house.

“I always wanted to help other people learn, but I never had the opportunity, it was too late to change careers and I couldn’t afford to go more than a year without a salary,” says Lisa.

For many years Lisa wanted to be a teacher for there was no greater satisfaction than sharing her knowledge. But she was never able to realize her dream.

Fate had a surprise in store for Lisa, her path crossed with Gustavo, a 13-year-old boy. He was helping his father in the air conditioning maintenance business.

“It was as if he read my mind, he heard me speak English a couple of times and asked me to teach him when he asked me, I felt like my heart was racing a thousand per hour and I felt those butterflies in my stomach that I haven’t felt in years and that reminded me that I was still alive and could do many more things”

That’s how Lisa began to live her dream that a few months ago seemed impossible. “Every time Tavo (as his dad called him) learned a new word in English, I felt an awesome joy, it didn’t take long and Tavo started inviting his friends and with every new kid that came I felt my heart grow bigger.”

It didn’t take long, and he decided to open a small English school. “I remember I started with a group of 5 children, and I charged him $1 a week, which I actually used to buy teaching materials so the children could continue studying at home”.

Josh and Lisa had the idea that they were too old to try new things. Many times the barriers are mental, and you set them yourself.

“Many times, we let ourselves go by the predetermined social statutes, you know, study, get married, have children and retire, but nobody tells you that after 60 you still have a lot of experiences to live” Lisa says.

Homes have become an important resilience asset during the pandemic, positioning themselves as an excellent investment for the future. There are reasons to do so

Mexico is full of beautiful places and we know you are dying to see some of them. In an effort to reactivate national tourism, which

Everyone wants to retire, but without giving up the lifestyle they worked so hard to have.  Mexico offers you the option to even improve your